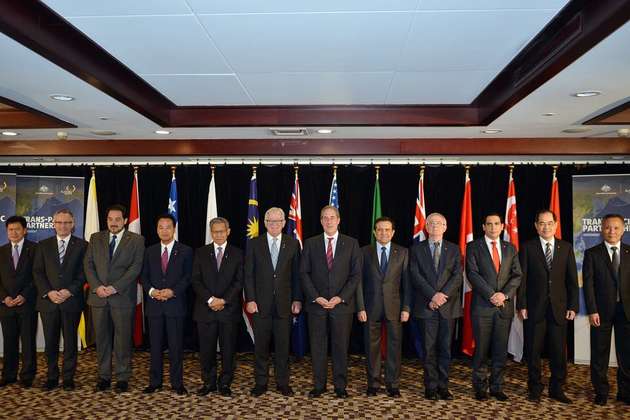 Australia and the United States are in a standoff over the length of time pharmaceutical companies retain exclusive rights to produce and market next-generation medicines.

Australia is one of a group of half a dozen countries resisting a U.S. push to set a standard of eight years protection and see five years as a red line, but progress was made on another key issue, the auto trade involving Japan, Canada, the United States and Mexico.

Amari said that in this area at least, countries were "one step away from completion".

Mexico, Canada and Japan had also almost agreed on the terms of a deal on increased dairy market access and that the remaining issues involved New Zealand and the United States, Amari added.

New Zealand, which has 17% of global dairy trade, making it the largest exporter, has been pushing for improved access for its exports as part of the TPP, but the US doesn't want to provide greater access to its markets unless Japan and Canada open up their markets for dairy imports.

Despite positive assurances from trade ministers Saturday, late night talks yielded no breakthroughs on these issues, with officials saying Sunday that an agreement was likely to be delayed again as countries at loggerheads ironed out the fine print on key sectors.

The Trans-Pacific Partnership (TPP) is a proposed trade agreement between several Pacific Rim countries concerning a variety of matters of economic policy.

Among other things, the TPP seeks to lower trade barriers such as tariffs, establish a common framework for intellectual property, increase wealth, enforce standards for labour law and environmental law, and establish an investor-state dispute settlement mechanism.

It is broadly similar to the TTIP (the Transatlantic Trade and Investment Partnership) between the United States and European Union.

Brunei, Chile, Singapore, and New Zealand were the first to join the agreement in 2006 and beginning in 2008, additional countries joined for a broader agreement: Australia, Canada, Japan, Malaysia, Mexico, Peru, the United States, and Vietnam, with talks on this broader trade agreement ongoing.