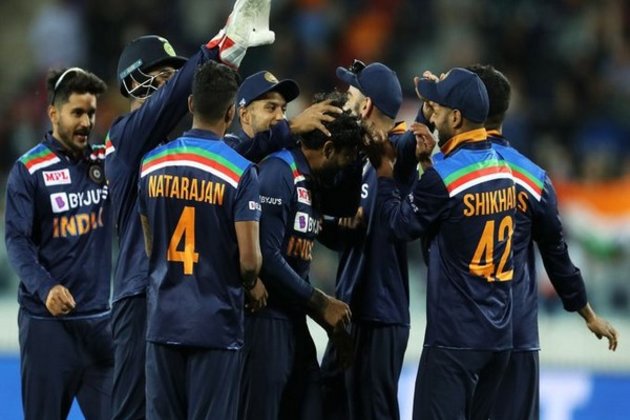 First T20I between India-Australia on Friday

Canberra [Australia], December 3 (ANI): After securing a consolation win in the third and final ODI against Australia, Virat Kohli and boys would now be looking to carry forward the momentum into the three-match T20I series, beginning Friday.

All the Indian players have the required experience of playing the shortest format of the game and every member of the squad recently participated in the Indian Premier League (IPL) so acclimatising to the format should not be much of a concern.

However, the same can be said about Australia as most of their star players were seen in action in the cash-rich league. However, India can look to exploit David Warner's absence in the three-match T20I series.

Warner's absence in the last ODI was exploited well by India as the side was able to dismiss make-shift opener Marnus Labuschagne early. In the shortest format, in all likelihood, either Marcus Stoinis or D'Arcy Short will open the batting for Australia.

For India, KL Rahul is likely to open the batting alongside Shikhar Dhawan. Both these batsmen were in tremendous touch in the recently concluded IPL, and with Virat Kohli coming in at number three, the Men in Blue can hope of scoring big runs if asked to bat first.

When it comes to bowling, Jasprit Bumrah and Mohammad Shami are likely to be rotated in the T20I series, as two Test practice matches would be clashing with the second and third T20I. There can also be a case where both Shami and Bumrah are rested for the last two T20Is.

However, India's bowling attack is well equipped to deal with the absence of Bumrah and Shami. T Natarajan, Deepak Chahar, and Washington Sundar are all present in the squad to lend more solidarity to the lineup and they are all good when it comes to the shortest format.

Australia were without the services of Mitchell Starc in the last ODI, but the pacer is likely to play the first T20I against India, as skipper Aaron Finch played down Starc's injury after the conclusion of the third ODI.

India last played a T20I series in January this year, and the side white-washed New Zealand 5-0 in Kiwi land. Australia and India are currently ranked at the second and third spot in the ICC T20I Team Rankings and the series will go a long way in also preparing for the T20 World Cup that is to be played in November 2021.