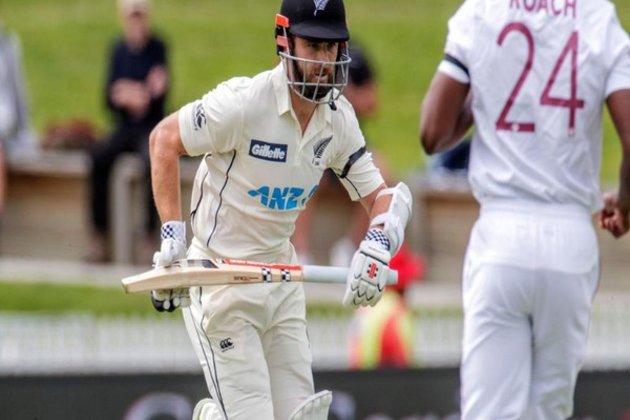 At stumps, West Indies are at 49 for no loss, trailing New Zealand by 470 runs.

Resuming the day from 243/2, New Zealand suffered an early blow as Ross Taylor (38) was sent back to the pavilion in the second over of the day. Kane Williamson, who completed his century, was then joined by Henry Nicholls on the field but their partnership also did not last long as the latter was dismissed by Kemar Roach.

Tom Blundell was the next batsman and took New Zealand over the 300-run mark, along with Williamson. The duo formed a 72-run partnership before Blundell was given LBW off Shannon Gabriel's delivery.

Although West Indies managed to take some wickets, the main threat, Williamson, was still at the crease and he kept the scoreboard running. Williamson played cautiously and went on to score his double century. This was Williamson's third double century and interestingly, his last double ton also came in at the same venue last year.

Williamson played a magnificent knock of 251 runs, his new highest in Test cricket. Moreover, Williamson's 251 is the highest individual Test score by a New Zealand batsman at Seddon Park.

Alzarri Joseph claimed the much-needed wicket of Williamson in the 142nd over and a few overs after that, New Zealand declared their innings with Kyle Jamieson (51) and Tim Southee (11) on the field.

Roach and Gabriel both took three wickets each. Also, Roach, who now has 204 wickets under his belt, went past Andy Roberts' tally of 202 Test wickets, meaning he is now West Indies' eighth-leading wicket-taker in the format.

Brathwaite and Campbell then began West Indies' innings and played defensive cricket. Both avoid playing risky shots and ensured West Indies do not lose any wicket on the day. Brathwaite scored 20 runs off 89 balls while Campbell is playing at 22 from 68 deliveries.