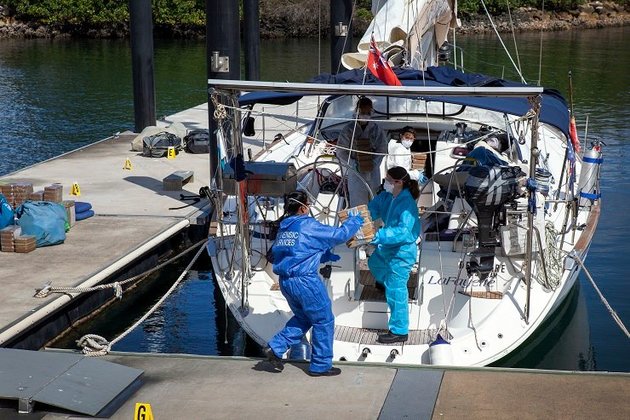 Two men have been sentenced to jail for their roles in crewing a yacht that was intercepted off the NSW coast in April 2020 and found to contain 991.9 kilograms of methamphetamine. The estimated street value of this amount of seized methamphetamine is $495 million.

New Caledonian authorities - French Customs and French National Police in New Caledonia - had advised the AFP's International Command and the ABF about the arrival of a yacht called the Mo'Chuisle into Pacific waters.

A second yacht, the La Fayette, departed Mooloolaba Marina (Queensland) on 31 March 2020 and sailed to a location in the vicinity of Norfolk Island, where it met with the Mo'Chuisle.

On 17 April 2020, the La Fayette was located by ABF's Marine Border Command heading south-west towards the east coast of Australia. The following day it was intercepted by the NSWPF Marine Area Command vessel, Nemesis, about 50 nautical miles east of Lake Macquarie (NSW).

The two crew members were arrested and 998 packages suspected to contain methamphetamine were seized. The media release relating to the arrest of the men can be viewed here.

A forensic examination of the packages revealed they contained 991.9 kilograms of methamphetamine.

On 15 July 2021, the two men were sentenced for attempting to import a commercial quantity of border controlled drug, namely methamphetamine, contrary to section 307.1, by virtue of section 11.1, of the Criminal Code (Cth).

"The AFP and its partners are setting an international benchmark for law enforcement cooperation. Our commitment in combatting this crime type is seeing us working across jurisdictions and borders to deal significant blows to criminal groups," said Detective Superintendent Ciantar.

"Almost one tonne of methamphetamine did not reach Australian streets because of this operation, and that means hundreds of millions of dollars will not flow into the pockets of organised crime."

ABF A/g Commander Enforcement East Garry Low says this operation highlights our ability to target criminal behaviour, whether it's in Australia or offshore.

"Criminal syndicates might think they can smuggle their drugs under the radar by avoiding Australia's land borders, but the ABF also has eyes on our oceans," A/g Commander Low said.

"This operation shows the strong results that can be achieved when Australia's law enforcement agencies work together with our international partners."

"The NSW Police Force, together with our partner agencies, will continue to target those involved in the drug supply chain on all levels," Detective Superintendent Critchlow said.

"We know that illicit drugs can destroy lives and communities. Together, we remain committed to ensuring public safety and putting those responsible before the courts."

Fed up with unruly air passengers, Senators call for prosecution